L’Ambre des Merveilles, the magic of the stars in a Hermès bottle

The history of Hermès begins in 1837 when Thierry Hermès created a workshop to manufacture saddles and harnesses for horses. The Hermès brand attracted many personalities and the store quickly became a must-see in the capital. In 1878, Charles Émile Hermès succeeded his father at the head of the company and diversified his activities into leather goods. The first perfume from the Hermès house came out in 1951 “Eau d’Hermès” and was inspired by the scent of a Hermès bag. In 2012, Hermès presented “L’Ambre des Merveilles”, a variation of the famous “ Eau des Merveilles ” imagined in 2004.

“L’Ambre des Merveilles” is the symbol of a feminine, voluntary, sensual and mysterious fragrance. Released in 2004, “L’Eau des Merveilles” is like a part of magic. According to Jean-Claude Ellena, then the brand’s official perfumer, “L’Eau des Merveilles is the scent of enchantment. A surprising and magical amber wood ”. From surprise to enchantment, “Amber of Wonders” here pushes the magic even further. The woman wants to be more sparkling and more dazzling than ever.

“L’Ambre des Merveilles” begins with a combination of spicy and citrus notes. Then, the heart is charged with sensuality and power thanks to the presence of patchouli and amber. Between delight and sensuality, amber delivers incredible secrets here. The base of “L’Ambre des Merveilles” continues on the sensual and magical trail by combining cistus labdanum and vanilla. The bottle uses the main codes of its predecessor. Round in shape, it is adorned for the occasion with a golden headband and a wonderful shower of golden sequins.

Hermès L’Ambre des Merveilles will be available in 50 and 100 ml Eau de Parfum.

The composition of this new fragrance is very gourmet, enticing Between delight and sensuality of amber, vanilla, labdanum and patchouli. 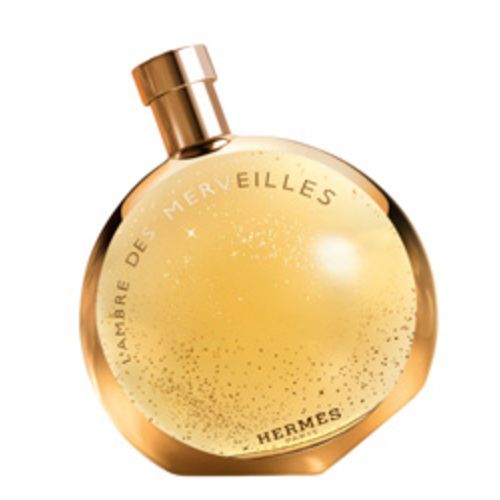 Today, the same perfume tries to bring back amber, this mysterious stone which seems to adorn itself as well with delicious vanilla as with woody patchouli.

A warm, oriental scent, presented in a round bottle and adorned with a shower of stars… This is something to flirt with the moon, the time of an olfactory journey.

Find it at the best price at our perfume partner: Ambre de Merveilles – Fragrenza Perfumes as well as all Hermès brand products .

Most popular this month

A * Men Ultimate, the new scented star from Thierry Mugler